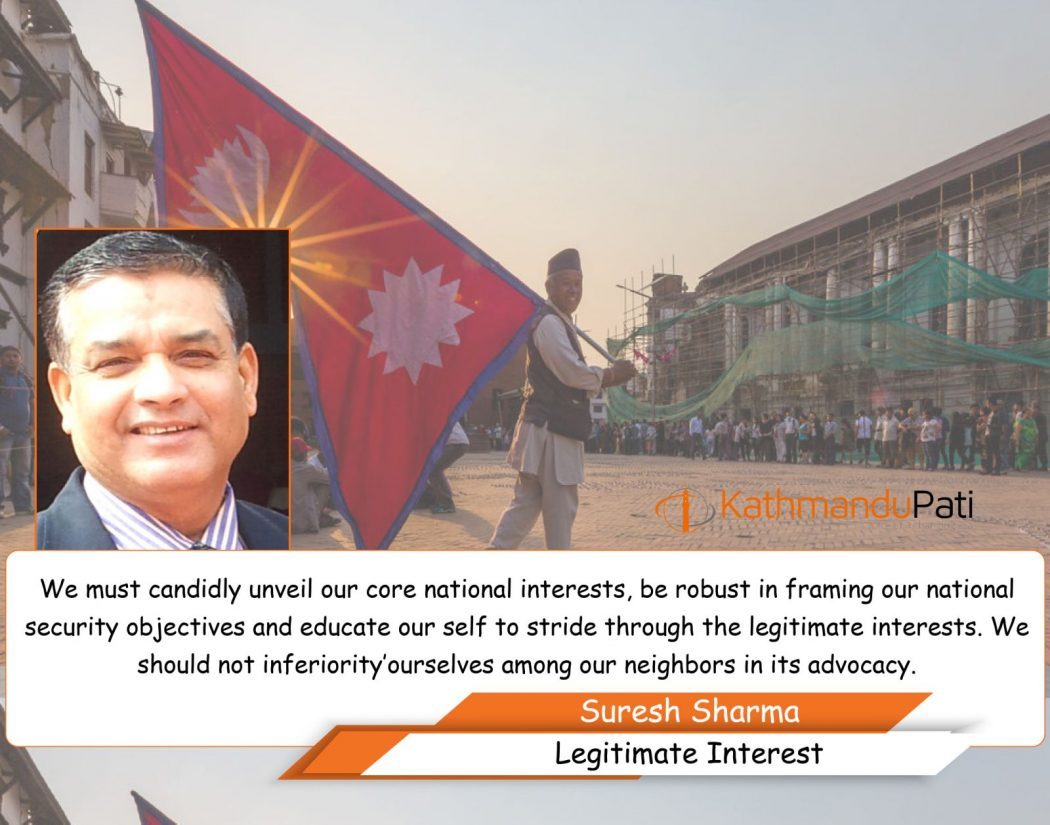 A nation which stood as a viable power before Sugauli Treaty, 1816 , now appears to be plague-ridden with an inferior mindset of sacrificed legitimate national interest in a fear of antagonizing a neighbor, no matter how its peoples’ convictions exist. Since that time of Treaty, our journey with firm national standing has also been really challenging, question arises whether due to a dire need of maintaining a modest security policy.

In the past week, many columns in the national dailies were filled with write-ups about an Indian border guard’s involvement in the heinous crime of killing a local Nepali youth Jay Singh Dhami by suddenly releasing the twin rope to fall in a heavy current of swollen Mahakali River while the latter was about to reach the other end. Before long, another incident of the air space violation due to an Indian helicopter hovering over Darchula came in. Now, the government forming a border commission on a Nepal China border at Humla district has surfaced.

For obvious reasons such incidents would add anxiety to the common people questioning why would Kathmandu keep silent in one issue and be vocal in the other. Locals mostly anticipate, by leaving Kalapani issue unresolved for long, it would heighten several impediments in the future or bring remorse for not maintaining our legitimate interest. With the spirit of our treaty, government must ensure that the locals of Byas Municipality should never face troubles in future in maintaining their daily necessities due to the sketchy infrastructure in Nepali side.

Although we were successful in chalking out a long awaited national security policy and foreign policy in recent years, these documents could not garner a broad based ownership of many political parties for many reasons and drew attention for further reviews. Task force was also in place to review these further and recommend necessary observations for their improvements, but still the task to develop it as a final paper could not be done.

Nepal , having both geopolitical and strategic significance has been experiencing diverse foreign affairs and national security challenges in her history, if not more in recent years which are intertwined, interlinked and interrelated to regional security environment, in particular . One can guess well why these policy documents demanded changes three times in six years; two times in same party rule and once in a different party rule in the government. The common minimum programme of new coalition government led by Nepali Congress has again made clear for its review. Be it the MCC or the BRI, frequent changes of guards in the country and their responses to foreign powers seems to be in tight rope in recent times.

The reality of today is the power competition among global powers and their mighty projects in new world order. Nepal must take a note of the nature of such strategic competitions and stay focused on its legitimate national interests. Legitimate national interests ensure both continuity and timely adjustment of key aspects of the policy that needs to be well defined.

The basic causes of infirmity in designing a staunch policy revolve round in a peripheral complex geo strategic and geopolitical setting. There has been increasing evidence that Nepal’s foreign policy guidelines are contested between political parties, and their understanding to neighbors has also remained limited. To get it upfront, our political approach and commitment must be prioritized with a robust national security policy but not with political elites’ fondness.

King Prithvi Narayan Shah , an architect of Nepal’s unification, through his ‘Royal Teaching’ had evoked a vision that Nepal being a tender yam between the two giants ( erstwhile Chinese and British Empire)should adopt a ideal foreign policy, well balanced to both of these, for its survivability. The linear concept of this robust national policy continued in many regency until Jang Bahadur Rana put a whole hearted weight to the British East India Company.

The ostracized 104 years Rana oligarchy ended in 1950 to offer Nepali people an unique experience of a new political system . Prithvi’s concept again became visible during King Mahendra’s time in power, when Nepal enjoyed an equidistant foreign policy with key players of Cold war, could establish cordial diplomatic relations with many countries within these blocks in a short span of time. The efficient foreign relations vividly existed during King Birendra’s rule in this constitutional monarchial rule.

After the promulgation of new constitution in 2015 Nepal entered in the world stage as a Democratic Republic and has been maintaining a neutral posture of foreign affairs . Even though we adopt the Panchasheel as the fundamental principle of our foreign policy, some political leaders of few parties sometimes tend to misalign to this doctrine while responding to external affairs. Nonetheless, our neighbors are “no enemies” but there is potential predicament where our national security would confront a challenge in this changing spectrum of international relations.

We must candidly unveil our core national interests, be robust in framing our national security objectives and educate our self to stride through the legitimate interests. We should not inferiority’ourselves among our neighbors in its advocacy. Hence, a well structured national security policy without any prejudice will stand firm and complement our ‘vital national interest’ and demonstrate Nepal’s sovereignty at world stage.

In regard to potential border mishaps, a strong foundation for mutual trust should be built between neighbors by developing a smooth 24/7 hot line communication and both sides stand firm in their position in the spirit of equal sovereign rights. As many border crossings are open towards south, hence, Nepal and India must be clear in the importance of regulating their border to avoid any undesired serious consequences. More importantly, big neighbors must understand our sensitivities and make no errors in future.