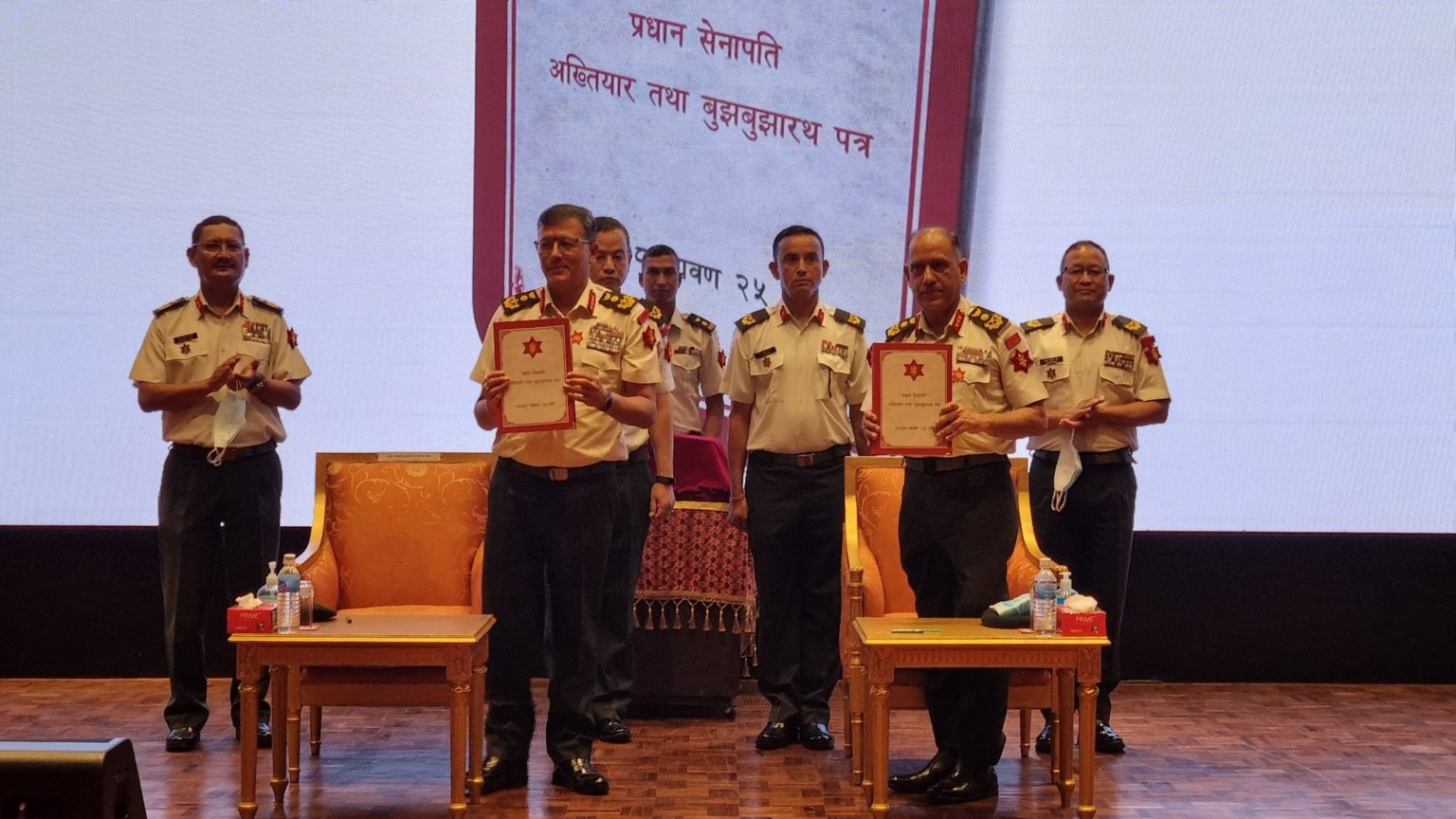 KATHMANDU – Chief of Army Staff (CoAS) Purna Chandra Thapa has handed the command of Nepali Army to Chief of General Staff, Lieutenant General Prabhu Ram Sharma. CoAS Thapa handed the responsibility of the organisation command to Sharma amidst a programme at the NA Headquarters, Bhadrakali today.

It may be noted that President Bidya Devi Bhandari has already, on the recommendation of the government, designated Sharma as the Acting CoAS with effect from Tuesday. As per the NA tradition, CoAS Thapa will be staying on home leave from Tuesday, one month before the expiry of his three-year term. Sharma will be taking the charge of NA as the 44th CoAS from coming September 10.

He is an alumni of National Defence College in India and training on terrorism and security from the United States of America, a course on self-defence from Thailand and Pakistan and a high-level training on peace keeping from Bangladesh.

Sharma has held various command and staff appointments at home and abroad during his career. He has commanded an independent Infantry Company in 2001 and an Infantry Battalion in 2004. He has also led an Infantry Battalion to a peacekeeping mission in the African Republic of the Congo (MONUSCO). He has commanded two Infantry Brigades namely number 3 and 6 Infantry Brigades. His Division Command was in the Mid Division in 2017 as the General Officer Commanding (GOC), the NA said.

Among his notable staff appointments during his 37-year long career are the Brigade Major and Operation Officer in a Division Headquarters. Similarly, he has served as the Military Secretary, Director of the Directorate of Recruitment and Selection, and the Director of Planning Policy and Staff Duties in the Army Headquarters. He has also held the appointment of Assistant Chief of Staff (ACOS), Directorate General of Military Operations (DGMO), Director of Master General of Ordnance (MGO) and Chief of Staff (COS). During his illustrious career, he has also held a diplomatic appointment as the Military Attaché in Bangladesh from 2008 till 2011. He currently holds the important appointment of the Chief of General Staff (CGS).

An alumni of National Defence College in India, he holds a Master’s Degree in History from the Tribhuban University, Nepal, and Master of Philosophy in Defense and Strategic Study from the University of Madras, India. He has also attended seminar in NESA Centre, Washington DC and executive course in the APCSS in Hawaii, USA. Lt Gen Sharma is decorated with the prestigious Suprabala Jana Sewa Shree.

Known for his straightforward attitude and decision-making acumen, Lieutenant General Sharma’s main priority would be to increase the Nepali Army’s operational capacity by operating the training which has been affected due to COVID-19.

Implementing in a systematic manner the Army’s restructuring in accordance with its ‘Three Plus One’ concept which has come into effect recently is another of his major tasks at the helm of Nepali Army.
He will also focus on continuing with the ‘good’ programmes initiated by the former Chief of Army Staff by evaluating their effectiveness and on their institutionalization. Motivating the entire rank and file within the Army organisation and carrying out welfare activities for their families are also the priorities for the Acting Chief of Army Staff.